Darul Ulum Islamic Modern Boarding School is a school that is located in Banda Aceh. The school concerns not only on the English learning process but on the Arabic learning process as well.  From the preliminary research on the school, it was found the students still face a lot of difficulty in expressing their ideas orally although they had memorized a lot of vocabularies. It was caused by they did not have enough practice to speak in Arabic in their daily activities in the dormitory. Thus, finding a suitable method to make the students able to speak fluently is the important thing to do. One of the methods is by using the Take and Give method. This method is one of the methods which are used in Curriculum 2013. The aim of this study was to find out how is the implementation of Take and Give model in teaching muhadhasah. Besides, this study also aimed to find out the influence of Take and Give model in increasing students’ ability in Muhadhasah. This study used a quasi experiment method which means that the study was conducted without a control group. 30 students in Class VA at Darul Ulum Islamic Modern Boarding School were taken as the sample of this study. In order to collect the data needed, one instrument was used. That was a test (Pre-test and Post-test). The result of the research showed that; 1) The implementation of Take and Give model of learning in Muhadhasah gave a meaningful influence to the students, 2) The implementation of Take and Give model of learning in muhadhasah was effective in increasing the learners’ ability in Muhadatsah. It was shown by the result of T-Test that is bigger than the result of Table Test) or it can be said that if the value of sig. (2-tailed) is smaller than 0,005 that is 0,000, it was accepted. 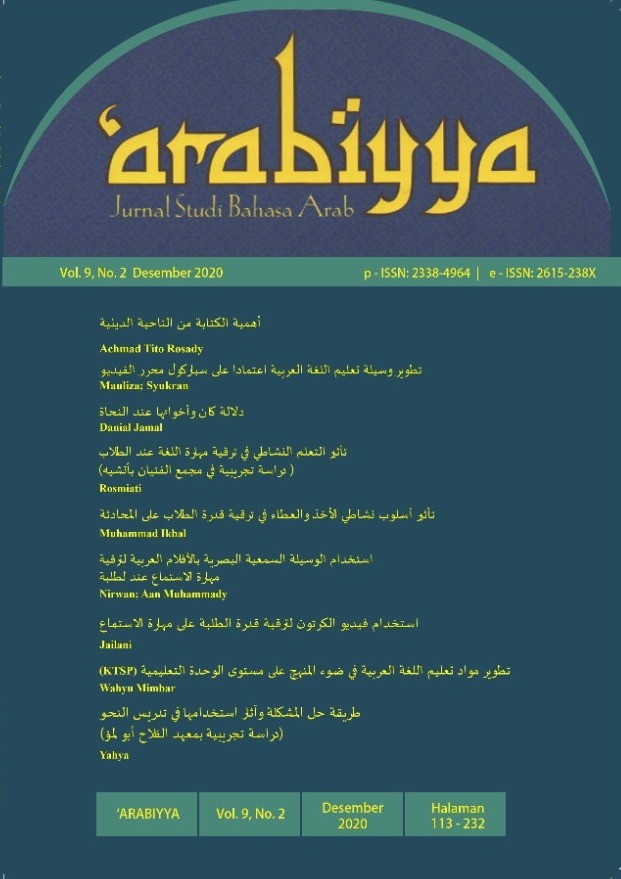